BENGALURU FINTECH SUMMIT-30th TO 31st May,2019 At Taj Westend - Bengaluru.

Addressing the media,Ms.Arifa Khan of Himalaya Capital Exchange
said,"this summit is an attempt to identify,facilitate building  &
nurturing of Tech Unicorns of the future.This event will be a best
learning & inspirational event for young techies,Startups who are
looking out for investments,and also for Bankers & investment bankers." 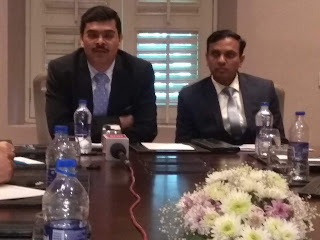 and also IT Companies based in Bengaluru to participate in India's
first Greenfield Industrial Smart City (AURIC) .Addressing the media,
Mr.Gajanan Patil,Jt.Managing Director -AURIC said," AURIC has
attracted a record investment of Rs.3600 crores in CY 2018 from
investors.AURIC expects to attract investment of Rs.60,000 To 70,000
crores from global players which will generate employment for lakhs
of people.The value of the output is expected as follows: Exports of
USD 11.6 Bn & Industrial output of USD 46.2 Bn.".

This Industrial Smart City is located very close to the Aurangabad
airport which is just 15 minutes away.

NDA Forming The government at the Centre- Clear mandate for Modi.
All the exit polls say NDA forming the government at the centre.
Narendra Modi will return as Prime Minister of the Country again.
Though Congress can get satisfaction that they have improved their
position,it is a poor consolation.The Mahagatbhandan OR anti Modi
Group should soul search & should learn few lessons.In the Maha
Gatbhandan,there is no one who can get the confidence of the entire
people of the country for the post of Prime Minister.Take for Example
Ms.Mayawathi, her party drew a blank in parliamentary poll in 2014,
Akhilesh may win few seats in U.P,Chandra Babu Naidu,who is
struggling to win against YSR Congress lead by Jagan,Sharad Pawar,
who may win few seats in Maharashtra,,Ms.Mamta Banerjee, is shaken
now as BJP may perform well &  may give her a jolt.In the opposition,the
winner will be DMK lead by Stalin.The main feature in this election will be
BJP which  will have all India Presence & CPI  & CPI(M)  may win
1 OR 2 seats or may  even draw a blank.

FEW LESSONS OPPOSITION MUST LEARN:
1.Ganging up against Narendra Modi  with Single Agenda Modi Hatao has
not  worked.All the opposition parties & their leaders went openly & personally
against Narendra Modi.
2.Chowkidhar Chor  will not work as the people who say that, themselves
should hear the voice of their conscience. People should not be taken
for granted.
3.Dynasty Politics have no role to play in Indian politics.
4.The new generation of voters donot tolerate mere rhetorics or slogans.
5.There is no leader worth the name to challenge Narendra Modi as on today.
6.Negative politics & so called SECULAR rhetorics will never work as the
people have understood the real meaning of Secularism.
Posted by P.B.SRINIVASAN. at 5/19/2019 10:21:00 PM 2 comments:

Speaking at the launch,Mr.Shinji Minatogawa,Managing Director,SHARP
Business Systems (India) Pvt.Ltd., "we are proud to offer our new family of
mono MFP's ,built on a single engine design that will empower businesses
of every size to choose the performance & features they need,while taking
advantage of the learning curve of a common interface".

The Company's repesentative also said that these printers are of High
quality & Cost effective.
Posted by P.B.SRINIVASAN. at 5/16/2019 10:14:00 PM No comments:

INDIAN STUDENTS AT HONEYWELL LEADERSHIP CHALLENGE ACADEMY AT ALABAMA US.