The First International Exhibition for Civil Nuclear
Industry in France.

An Exhibition that covers every link in the  added value chain  of the civil
Nuclear Industry.FIVE Round tables moderated by the Directors of major
groups and international experts will be focusing on subjects such as NPP
operation,Safe & Proven Technologies for reactors and fuel cycle,future
Technologies,Dismantling & Waste management,Training Human resources
for nuclear programs and Nuclear Technologies for Medical.

A club of the Elite & irrelevant.

Every 6th person in the world (man or woman) is an Indian. India has 1.2 billion
people. India is an ancient country with 5000 years of culture & civilisation .
There are countries who are permanent members of the security Council whose
geography, the population and the civilisation is less than India are members of the
Security Council who have veto powers.Keeping India out of Security Council is the
biggest joke of the century. The Prime Minister of India Mr.Narendra Modi has rightly
called upon the International community to recognise the importance & contribution
of India to the world.

Further, Mr.Modi has rightly said that there should be an INTERNATIONAL YOGA
DAY  as India  gave Yoga to the world which is being practiced all over the
world for healthyliving.
Posted by P.B.SRINIVASAN. at 9/27/2014 10:05:00 PM 1 comment: 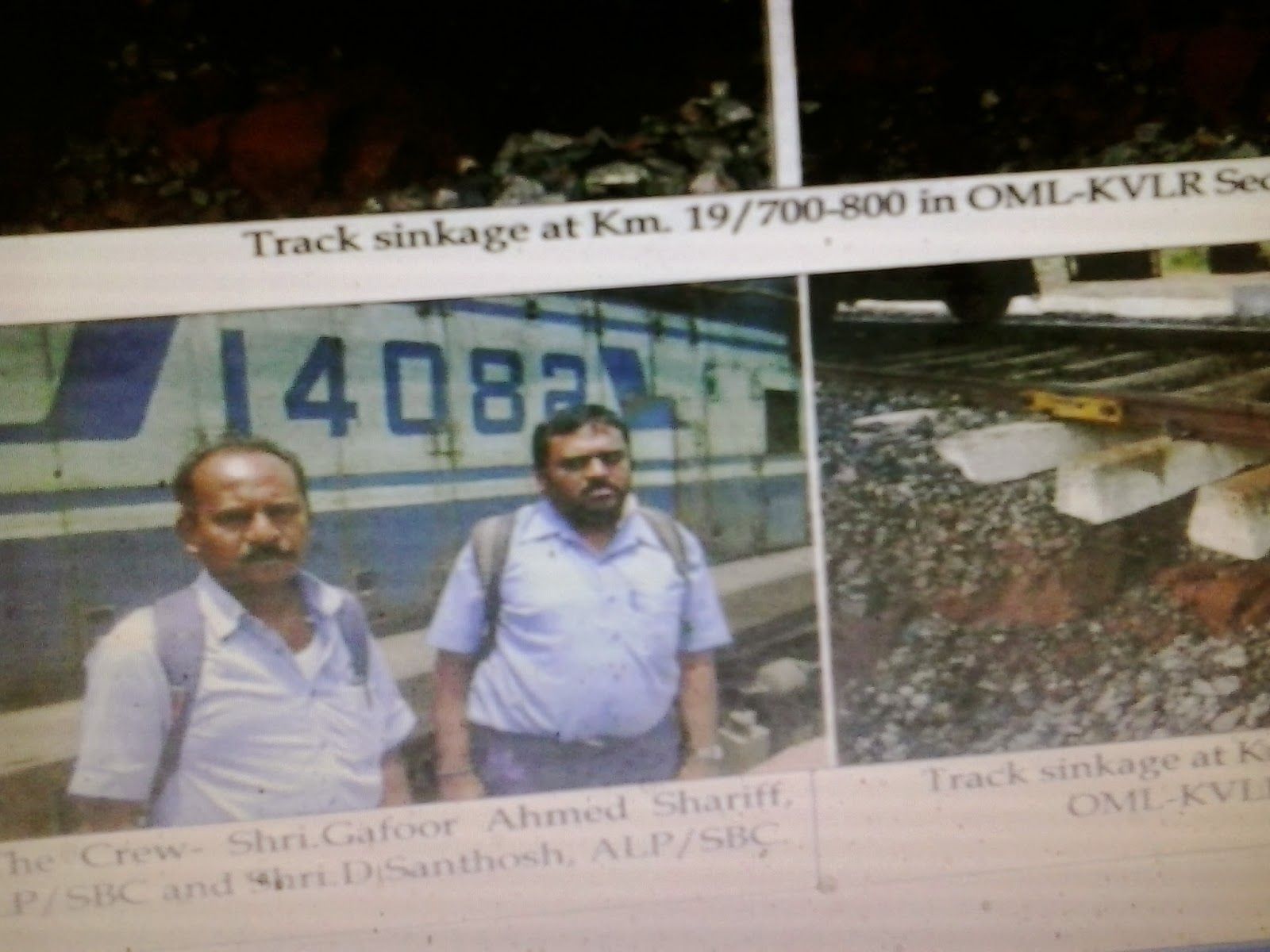 Mr.Gafoor Ahmed Shariff and Mr.D.Santosh,Loco Pilot &
Asst.Loco Pilot stopped the
train by applying emergency
brake & informed about the
shrinkage in the track to
Karuvalli station and also
to power Control office at
Bangalore.


They were manning the train number 17236 Nagerkoil-Bangalore City express.
They noticed the track shrinkage at 06.40 hrs on 23.09.2014.Their alertness
averted the Train accident.

Mr.Anil kumar,Divisional Railway Manager sanctioned an award of Rs.2000/-
to Mr.Gafoor Ahmed shariff and Mr.D.Santosh in recognition of their timely
action.
Posted by P.B.SRINIVASAN. at 9/26/2014 07:51:00 AM 1 comment:

The Country is Proud of ISRO- Mars Mission.

After completing 666 million Kms journey in more than 10
months,the spacecraft  MANGALYAAN will now study the
red planet's surface and scan its atmosphere for chemical
methane.
Posted by P.B.SRINIVASAN. at 9/24/2014 06:27:00 PM 1 comment: 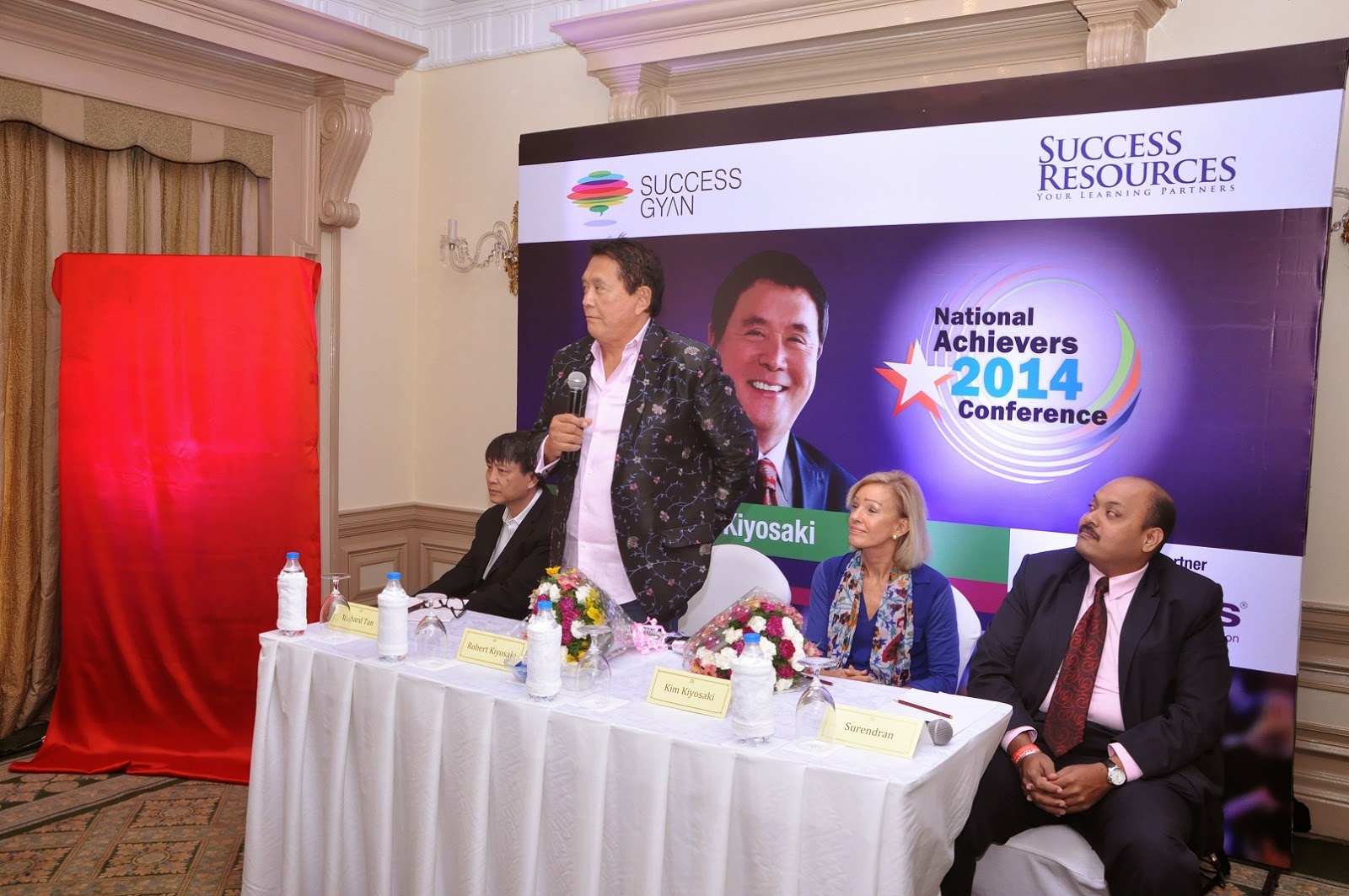 Financial Literacy is the key
factor that differentiates the
poor and the middle class from
the wealthy-says Robert Kiyosaki.
National Achiever's Conference
2014 kicked off -a two day event
in Bangalore with 11 eminent
speakers.

Addressing the media,Mr.Robert Kiyosaki said,the following:
1.India is the future.2.God wants all of us to be rich.3.standard of education is
going down in India.4.Debt is new money .Further, 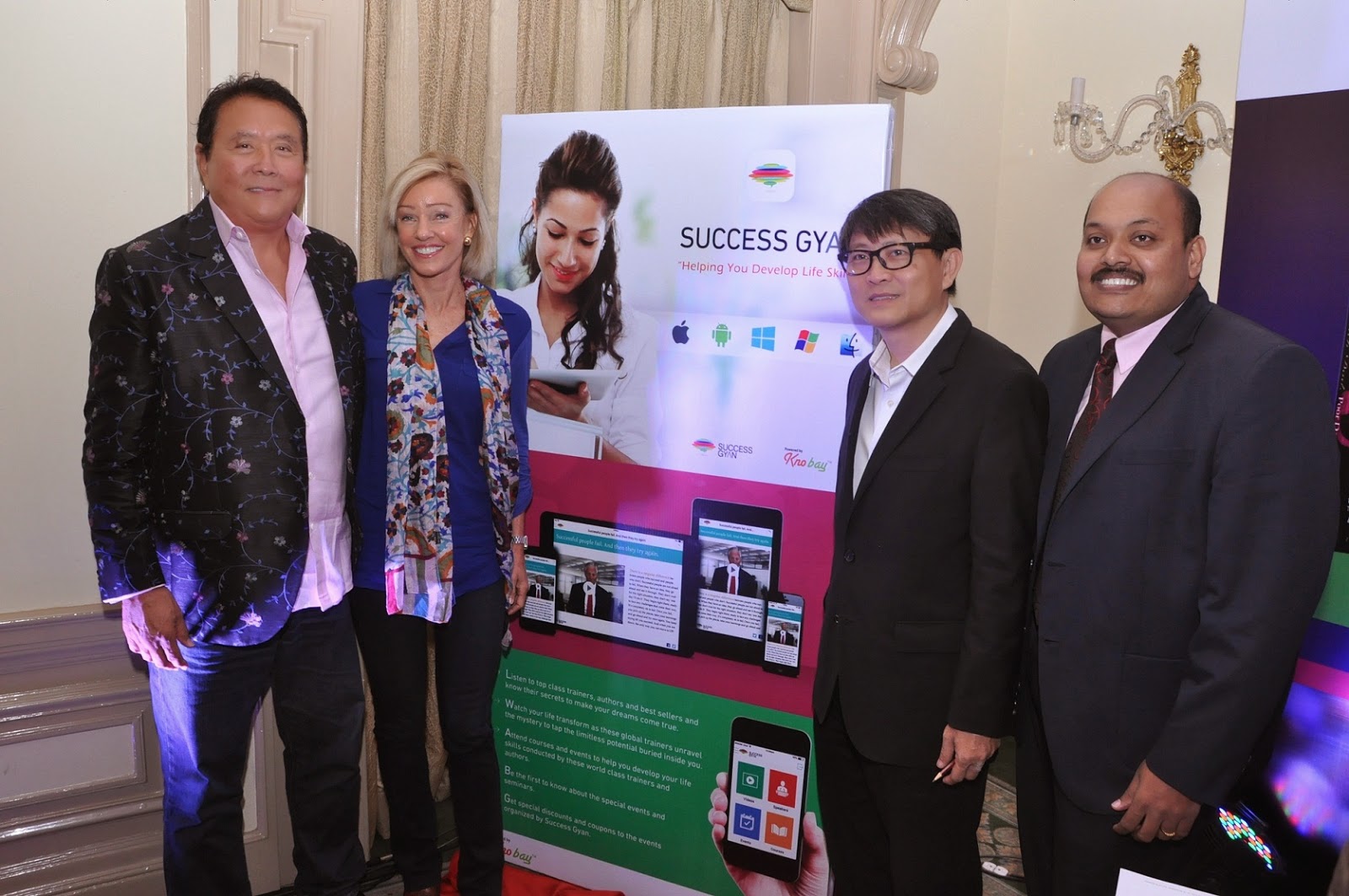 he said we always say that the coin has two sides,Head and tails but there is also
another side i.e Edge from where we can convert  failure  into success.The savers
donot get the yield they deserve due to inflation and erosion of money.He said the
real education begins when one steps out of school.Though many may not agree
with his views ,but there are certain lessons to be learnt.His famous quote is
"Instead of working hard for money,make money work for you".

Ms.kim Kiyosaki,wife of Mr.Robert kiyosaki was in praise of the Indian Women.
She said the women of India are strong and role models for the world.

Renewed focus on the Indian manufacturing Industry.
-Set for revival and growth.
- Time for "Made for India".
Manufacturing industry contributes 13% of GDP presently,of which 45% are MSME's
employing about 70 million people.The focus is on to increase it to 25% of GDP.

PROVIDENT WELWORTH CITY,IN BANGALORE , A PROJECT PROMOTED
BY PROVIDENT HOUSING LIMITED,A WHOLLY OWNED SUBSIDIARY OF
PURAVANKARA PROJECTS LIMITED HAS ESTABLISHED ITSELF AS A
LEADER IN THE MID INCOME HOUSING.

The project is located  about 45 minutes from the International airport on the
Yelahanka-Doddaballapur road,the project has 3360 units.The entire project
is in an area of 41 acres with all modern amenities like a club House,well
equipped Gym,a 9000 Sq.ft swimming pool, a multi purpose hall and it is
in the gated community.The project has seen an appreciation from the launch
of the project till date. 80% of the flats are sold.Now, 3 BHK flats are
still available with area measuring 1075 Sq.ft ,with carpet area of 752 Sq.ft
is available at Rs.39.00 lakhs (all inclusive).
Posted by P.B.SRINIVASAN. at 9/05/2014 09:59:00 PM 1 comment:

The Bangalore Nihongo Kyooshi-Kai,(Japanese Language Teachers
Association,Bangalore) Or BNK has announced the availability of
application forms for the Japanese Language PrOficiency Test (JLPT)
2014. 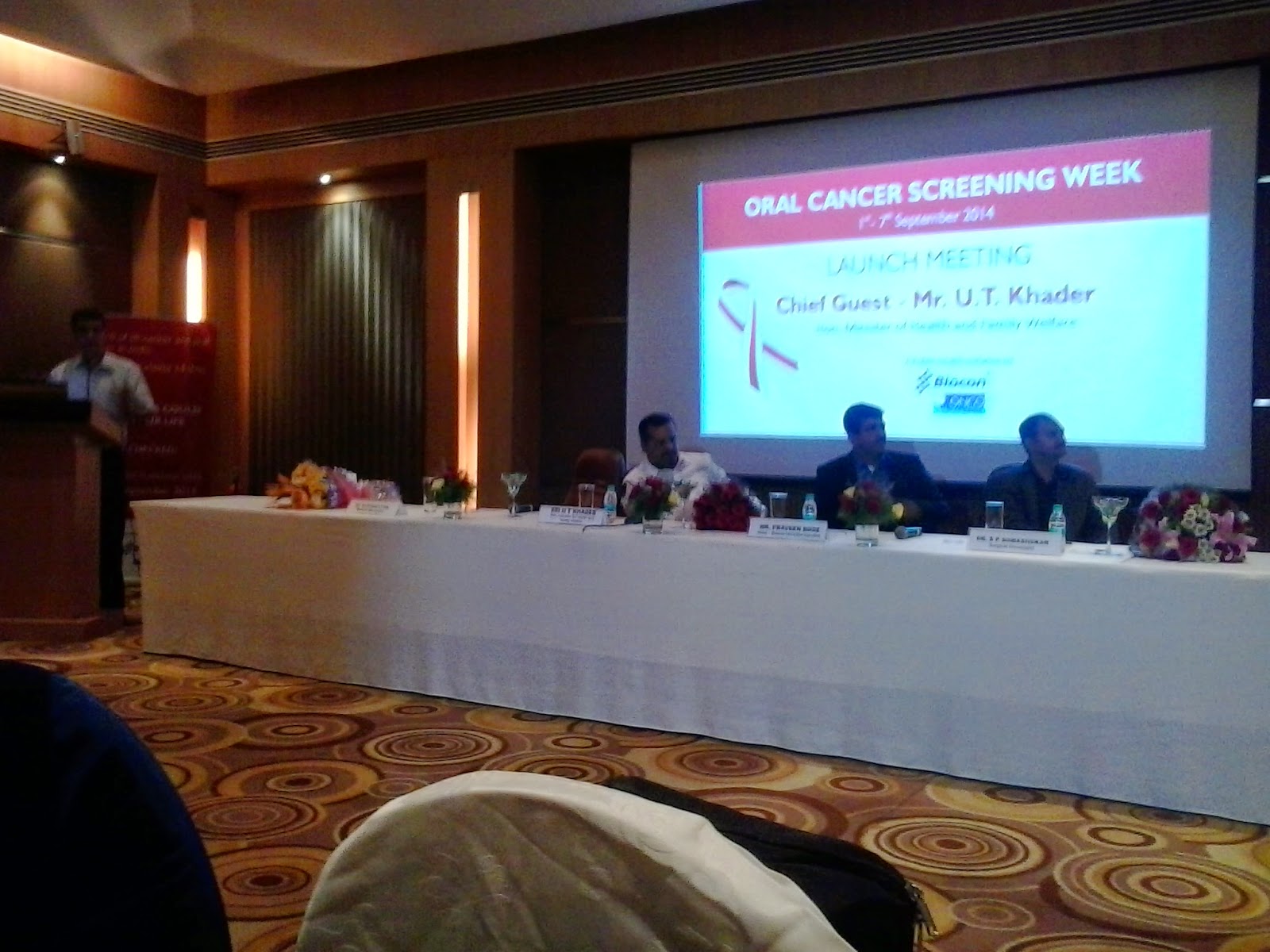 Week long campaign
(Sept,1 To Sept,7,2014) will be
organised across various centres in
23 cities In India.

Some Facts regarding Oral Cancer.
# Every year 1,30,000 people succumb
to oral cancer in India.

# Early detection can increase 5
years survival rate from 52% to 80 to 90%.
# 4 in 10 all cancer are oral cancer in India.Oral cancer claims 14 lives every hour.
# Cancer risk is almost TRIPLED in alcohol drinkers who also smoke tobacco.

Mr.U.T.Khader,Minister for health & Family Welfare,Govt.of Karnataka launched
the programme.He said the government is coming out with Oral Health Policy
after the vision committee submit its report. 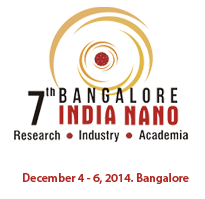 India is one of the top 3 countries in NANO Technology.Bangalore India Nano 2014 will
feature an International conference,Product &
Technology  Exhibition,Key Note talks by
distinguished speakers,Nano for the young
programme,Poster session,Excellence awards etc.
Posted by P.B.SRINIVASAN. at 9/01/2014 10:09:00 PM 1 comment: