BANGALORE RANKED No.1 FOR DOING BUSINESS IN INDIA.

Bangalore is  ranked as the hottest business destination in the country leaving
behind Mumbai & Chennai according to study conducted by Global Initiative for
Restructuring   Environment & Management (GIREM- a non profit organisation)
and DTZ global leader in property services.

The  public has the right to life and hence the Food  Safety & Standards Authority of India should make periodic checks of all manufacuring facilities of carbonated
soft drinks says the Country's highest court,the Supreme Court.

Well known nutrionist Dr.Ishi Khosla,says,"colas have destructive effect on one's
health essentially because of the high sugar content.Each 330 ml of a serving of
Cola contains about eight to nine teaspoons of sugar,a primary cause of Obesity
among children and adult alike.Besides, the calories in Colas are all empty calories
and provide no nutrition but only chemicals.".

'"The caffeine content in colas  though minimal,also makes them addictive".says
Dr.Sunita Roy Choudhary of Rockland Hospital.

Mr.Raghuram G Rajan,RBI Governor said, RBI will soon come out with  a new
policy  for entry of  foreign banks that may even allow them to take over small
Indian banks. This move is not a good move as we are opening a big financial
market to foreign banks.As we know foreign banks are interested in only retail
credit and credit cards. They may not be willing to  operate in remote rural
areas like State bank of India and public sector banks.If at all RBI wants to
open up & allow new foreign banks into the country, they may stipulate the
same conditions as they have set for new banks entry whose applications are
still pending with RBI.Foreign banks with their large capital base may swallow
few small banks which are prone and whose capital base is small.Once they take
over such small banks,they may close unviable branches and would like to operate
only in Tier  I and Tier II cities as they are interested only in their bottomline.
Posted by P.B.SRINIVASAN. at 10/18/2013 11:57:00 AM 1 comment: 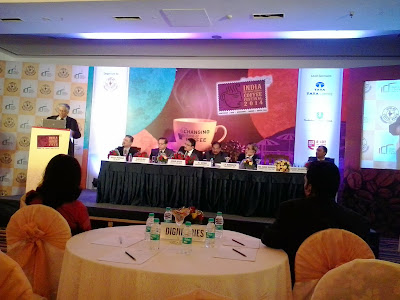 National and international players in the coffee industry including policy makers,industry captains,exporters,manufacturers and
world leaders in the coffee industry will be participating in the  IICF.The Theme of the conference will be " THE CHANGING FACE OF COFFEE".The conference will be
addressed by 40 global experts covering marketing & production trends.Workshops
on processing, roasting and brewing will be held by leading global companies like
Pinhalense,Probat,Buhler,Bunn O Matic,Marco & Kaapi machines.The highlights of
this five day event will be Coffee Awards,Coffee trail,Barista championship,Coffee Quiz and Lauch pad.

The Coffee industry faces many problems  which includes shortage of skilled
man power and the attacks from the pests like White stem Borer
Black Twig Borer ,Coffee Borer Beetle etc.Hence, there is an urgent need to address these problems.Further, there is also need to brand Indian Coffee and also expand the area of cultivation.  .
Posted by P.B.SRINIVASAN. at 10/13/2013 12:07:00 PM 1 comment:

I have observed Mr.Rahul Gandhi as a sober person who normally does not get
provoked But I was shocked to see him in the Press conference using strong words
like 'nonsense'and saying that the ordinance should be torn. The ordinance is
approved in the cabinet sent to the President for signature and two senior
ministers in the cabinet has gone to the President to convince him about the purpose of the ordinance. At this juncture,calling the ordinance as nonsense does
not make  sense.Afterall, he is the senior functionary of the Congress Party and his views are respected not only within the Congress party but also in the government.

He should have voiced his opinion in the congress party's forum which  would have
stopped the ordinance.Ofcourse, the ordinance is flawed and the public sentiment
is against such Ordinance.

Even his father, late Mr. Rajiv Gandhi was also a sober person and ever smiling.He
too once got irritated and said in a Press conference to a question of a journalist
that 'you will be discussing with  new foreign secretary'.By this statement,he
almost sacked the senior foreign service bureaucrat Mr.A.P.Venkateshwaran,who
was the Foreign Secretary then.This ended the distinguished career of Mr.A.P.Venkateshwaran.

Indian secularism should be a model to the world.We as Indians are secular in our
thought  & action. India never attacked any country for any reason,though it was
attacked  for centuries. India has seen the invasion of Moghuls,Greek,Portuguese,
French,Dutch & the British. Many foreigners ruled this country for centuries and
even some looted and plundered this country of its wealth. India called as Bharath
earlier was following the Sanatana Dharma, a mantra  for harmonious living. India
is a great country with rich culture & traditions which attracted many towards
it.India has nurtured many religions,and also given birth to many religions.Hence,
nobody need to be worried whether India will become a communal country. India
can never become a country which hates any religion.My appeal to politicians of
every hue and colour not to talk of religion or talk of majority or minority in their
election speeches.Let us talk of development, Industrial growth,infrastructure
growth,employment to all and above all peace.
Posted by P.B.SRINIVASAN. at 10/06/2013 11:53:00 AM 1 comment:

Mr.Shetty said, 'there are instances of some people attacking the farms and employees and damaging the poultry farm properties".He requested the authorities to immediately address these problems. The Association is also planning to stage a rally in Bangalore palace grounds on october 26th,2013 to draw the attention of the government to various problems faced by the members of the association.About 20,000 farmers from across the state of Karnataka are expected to participate in the rally.
Posted by P.B.SRINIVASAN. at 10/03/2013 05:49:00 PM 1 comment: